So its been a bit a fallow time Oldhammer wise for me for quite a while but I thought I would use Orctober as a push to get back into things.

Admittedly these three I actually started for last Orctober and never actually finished. But their done now, although still suffering from my aversion to finishing bases...

Here's Nogwize himself front and back 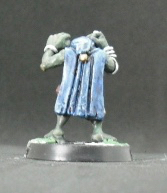 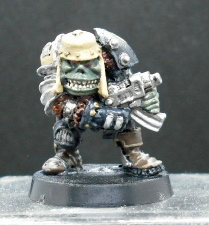 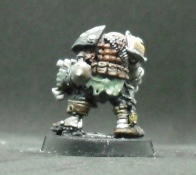 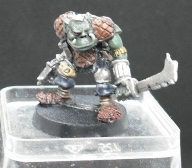 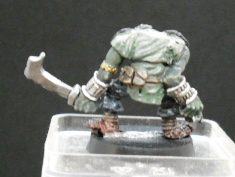 I incorporated the dull brown yellow on all three to tie them together, and the minders both use mostly the same colours although not necessarily in the same places.

Trying out a new lightbox for the photography, although since my camera is refusing to focus properly at they haven't come out quite as well as I hoped.

Anyway, hopefully it won't take me as long to paint something else...

Been a while since I've posted anything here, or indeed done much painting on the Oldhammer front, however this weekend I finally pulled my finger out and finished a couple of minis that have been sitting part painted for some time (can't quite recall for how long...). They are both from the original C100 range of space marines.

These are the muscle for Inquisitor Tycho's retinue who accompany the Inquisitor to smite the heretics once his more covert operatives have established the perpetrator's guilt.

They are both painted in a similar fashion to Tycho, with a Codex Grey basecoat, shaded with Delvan Mud and highlighted with Fortress Grey.

First up with have Brother Ramius who likes hitting people with his chainsword. 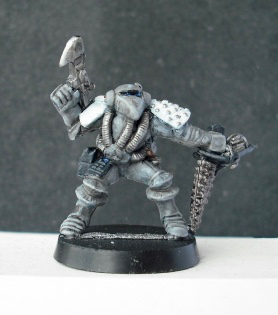 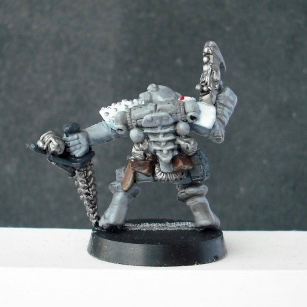 Then we have Brother Honourius who prefers to sit back and blasts heretics with his missile launcher. 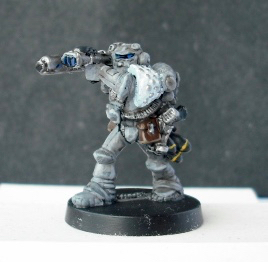 And finally a shot of the two with the Inquisitor himself. 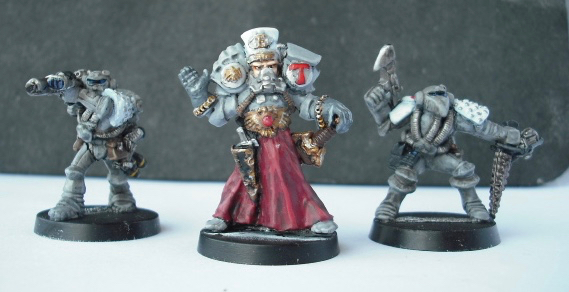 So... a bit late for Orctober but these were painted in October but haven't had chance to take any photos until now.

A bit rushed so I'll have to try and take some better photos later.

Anyway first up with have a further member for my power armoured Nobs mob. 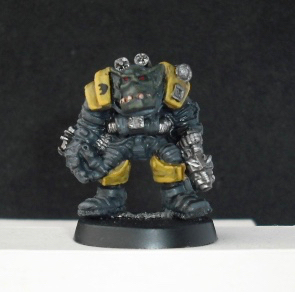 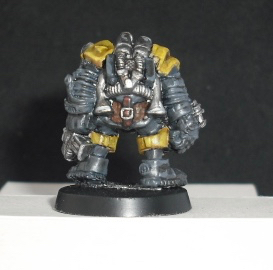 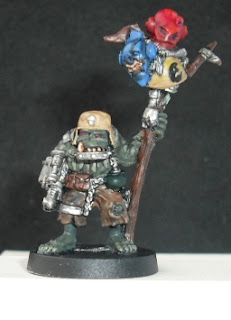 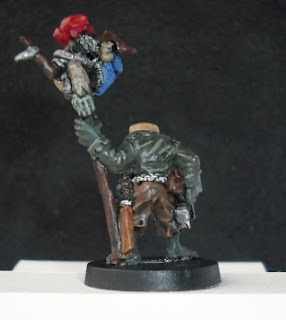 Finally a Group shot with the other power armoured orcs and the boss I painted for last Orctober.

Painting up some Space Marines to join Inquisitor Tycho's retinue next.

I see a bizare alternative dimension (with my third eye)...

Been having a slow period Oldhammer wise but have finally finished a model I started working on at the same time as my Redshirts in the previous post.

That was the navigator from the Adventurers range. He will also be joining Cap'n Smyrk's crew, if the eponymous captain is going to go gallivanting across the Imperium just barely avoiding the authorities he's going to need some "safe" way of navigating the warp...

The back story is that he is a renegade from his house who has signed on with Smyrk and his vagabonds in order to make some cash and receive protection from his relatives. 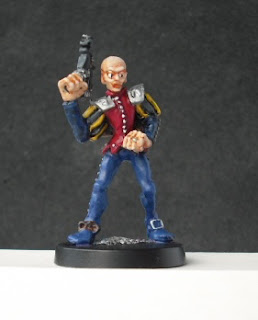 Took me a while to decide on a scheme for his fancy clothes, and finally settled on mix of Picard's uniform (he is bald...) and Trois' more variable costumes. 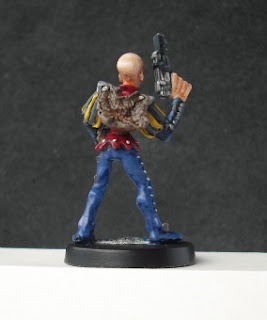 I needed to incorporate the hazard stripes that are the common marker for Smyrk's crew but didn't really want to have them directly present given his more flamboyant style so I tried to use his flouncy sleeves.

Don't know what I'll do next but till then...

And now for something fantastically different...

Just finished off a couple of minis this morning, a bit different from my normal fare, being neither 40k related nor produced by Citadel.

It's not often I do fantasy figures these days and these two don't have any particular story or project that they are connected to I just painted them on a whim. 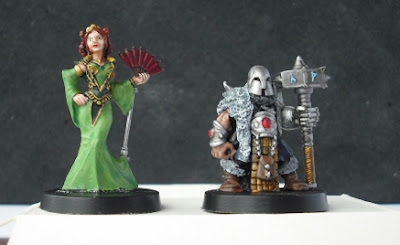 The first is by Reaper from their Pathfinder RPG tie in range, I originally bought her to use as Regis d'Sarck but she was so much taller than any of the old Rogue Trader minis that I was using that she didn't really fit so she was replaced with the Black Scorpion Governor's daughter I finally used.

She sat undercoated for quite sometime whilst I decided what to do with her. 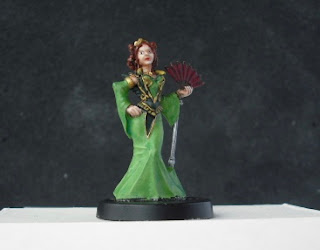 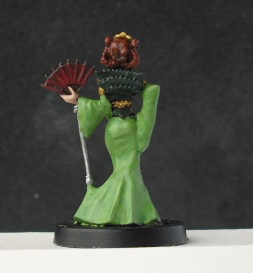 To go with her I have a Hasslefree dwarf "Kain", who I bought at Salute last year along with the barmaid and strumpet I painted a while back. He wasn't bought for any particular reason other than I liked the mini.
I pulled him out recently and decided to paint him and it seemed to be a good opportunity to paint the Reaper mini as well. 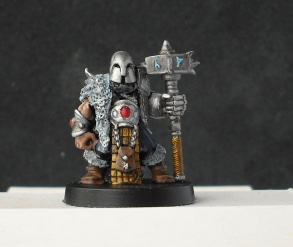 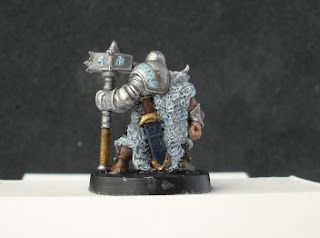 Still working on the Rogue Trader Navigator that I started sometime back.

Posted by Captain Smyrk at 14:30 No comments:

Following up on my previous post here's the guardsmen I was painting fully painted and varnished.

A couple of close up views of the sergeant: 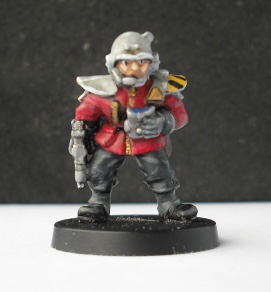 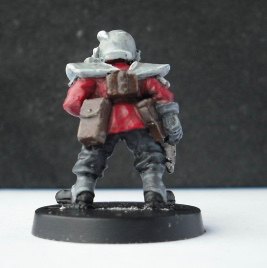 And the whole lot including the two I'd already painted.

Currently painting a RT Navigator who will also be joining the eponymous Rogue Trader's crew.

You and what army?

So I'll admit that I've been in a bit of low point when it comes to hobbying so far this year and have thus had nothing to post for the last few months.

But I have recently started to get back into painting up some of my small lead pile, they're not quite finished yet but since I haven't posted anything in a while I thought I'd show off where I've got to with them.

Just three more and I'll have a whole squad! Which doesn't sound like much by most people's standards but for me is quite an achievement.

They still need Smyrk's crew hazard strips and a coat of varnish but everything else is about done.

Anyway will post some more photos when their done, currently also working on the Rogue Trader Navigator who will also be joining Smyrk's crew (needs someone to navigate his way through the warp).