So a pretty productive weekend as far as I go with two more minis mostly finished.

First up a first Eldar Aspect warrior, a Fire Dragon. Fire Dragons have always been my favourite Aspect, since I first saw these models in the battle report in WD 141 (the second issue I ever bought), despite the fact that they gave a pretty poor performance (probably something to do with Jervis Johnson being in command...). 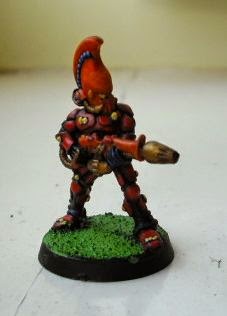 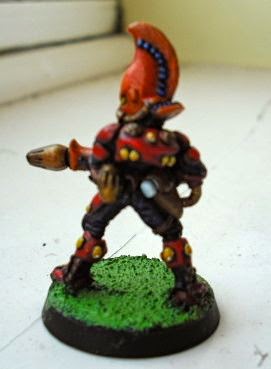 I've tried to tie him in with the other Eldar I painted so he has most of the main colours used on them on him somewhere and his pistol is the same colour as their weapons. He was based and primed when I bought him (explaining why his base is done, so unlike me...) although the base needs a bit of extra work.

I've currently got three of these plus the Exarch (one of my all time favourite minis) and two of the 3rd edition Fire Dragons which I also like. Oddly I'm not much of a fan of the latest figures despite them harking back to these classics in style.

He is joined by my first Ork, I need to find some more of these I currently have four boys and three bosses... not a particularly well balanced force... 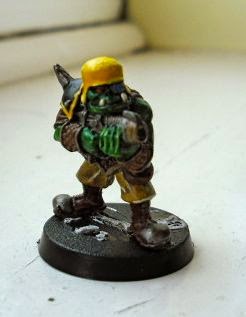 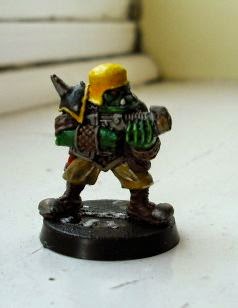 Although I called him finished at the time after another look I think he might need a few extra highlights on his skin and gun. 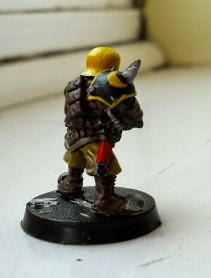 And here you can see my attempt at freehand, Bad Moons are my favourite of the Ork clans. I'll be going with the old Rogue Trader (and I suppose modern as well) take of having all the orks in the force belonging to the same clan rather than the mix and match approach seen in 2nd Edition.

Anyway that's it for now. Til next time...


Cap'n Smyrk
Posted by Captain Smyrk at 19:06 No comments:

And now for something a little more Juvenile

The latest addition to my Eschers, a Juve to round out the gang. Again a touch up of an existing slapdash paintjob. 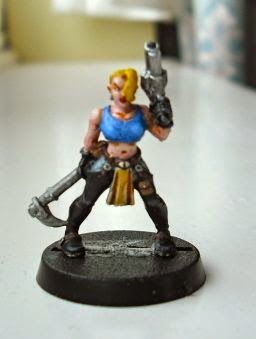 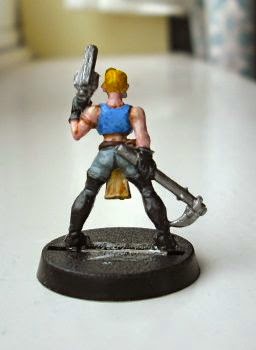 She looks a bit cross-eyed, maybe one day I'll get my eye-painting to be consistent...

Anyway here's a pic of all the girls I've done so far together.

Still two more gangers and the heavy (although she was never actually assembled or painted first time round) left and I'll have done the whole of the gang box set (might have to see if I can acquire some of the others off e-bay).

Cap'n Smyrk
Posted by Captain Smyrk at 20:38 No comments:


So following up my little background piece I have the model to represent the villainous miscreant mentioned in it.

Yes this does mean that I have uncharacteristically painted a model almost as soon as I bought it...

But my excitement about the Star Raven/Time Lord figure was too great, especially after I had the idea for the colour scheme. Any one who guesses the inspiration wins an internet... 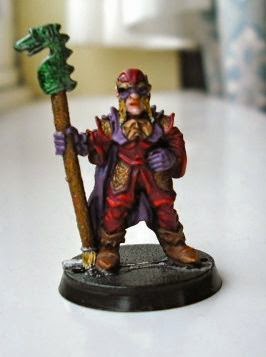 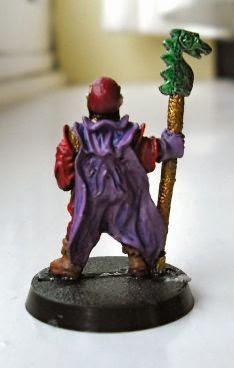 I've even written up some stats for him, I don't see him as much of a fighter relying on his psychic powers, mutant abilities and minions to keep enemies at bay. I've also tried to restrict his psychic abilities to mind manipulation and telepathy effects (plus teleport and an Aura) no pyrotechnics.


Today's Thought:  Purge those who are Unclean
Posted by Captain Smyrk at 17:56 No comments:


My pursuit of the reviled heretic and scoundrel Julius Smyrk has brought me to this unremarkable planet on the outer reaches of the Imperium. I am at a loss to explain why its founders chose to name it Euphoria, there is certainly little euphoric about it now.

Unfortunately Smyrk's trail appears to have gone cold but my investigations continue nonetheless. More worrying is the presence of a previously unrecorded heretical cult upon the planet. This cult appears to be spreading widely amongst the planetary population and the Imperial Commander and his forces seem unable (or possibly unwilling?) to stem the tide.

I have contacted the local Arbites precinct and gleaned as much information from them and other sources as I can. The cult denies our most benevolent Emperor's light and instead directs their worship towards a shadowy entity/deity referred to as the Incandescent Star Wyrm.

The centre of the cult revolves around a mysterious individual known only as the Emissary. This individual purports to be a messenger or prophet of the aforementioned Star Wyrm. I have been unable to acquire much information about this 'Emissary' who seems to a be able to travel great distances in an impossibly short time. He has so far eluded all attempts to apprehend him.
Reports do mention his miraculous powers and inhuman charisma.

My suspicions are that this 'Emissary' is in all likelihood a psyker, probably a dangerously powerful one. Other evidence points towards his being a mutant or possibly some form of alien infiltrator. Certainly he represents a clear and present threat to the people of Euphoria and the Emperor's interests.

I will therefore call a temporary halt on my search for Smyrk and concentrate my efforts on the destruction of this cult and its malign leader.


Thought for the day:        There are no shadows without light
Posted by Captain Smyrk at 23:04 No comments: