The wind whistles across the desolation, whipping up swirls of dust from things long undisturbed...

A tumbleweed rolls into view, before slowly bouncing off into the distance...

"Uhhh... Hello? Is there anybody out there?"

Been some time since I did anything Oldhammer related either. However there are a couple of things I've had done for a while but had never got around to photographing.

Now I've finally got around to getting some pics I can show them off!

First up we have another addition for my Star Wars inspired scenario idea. Fitting the colour scheme to the model was a little tricky but I'm pretty happy with how it came out, especially the tentacle arm.

The second model is also Star Wars inspired although not for the scenario idea, I just happened to have the model and I thought it fitted quite well, maybe as a future development. 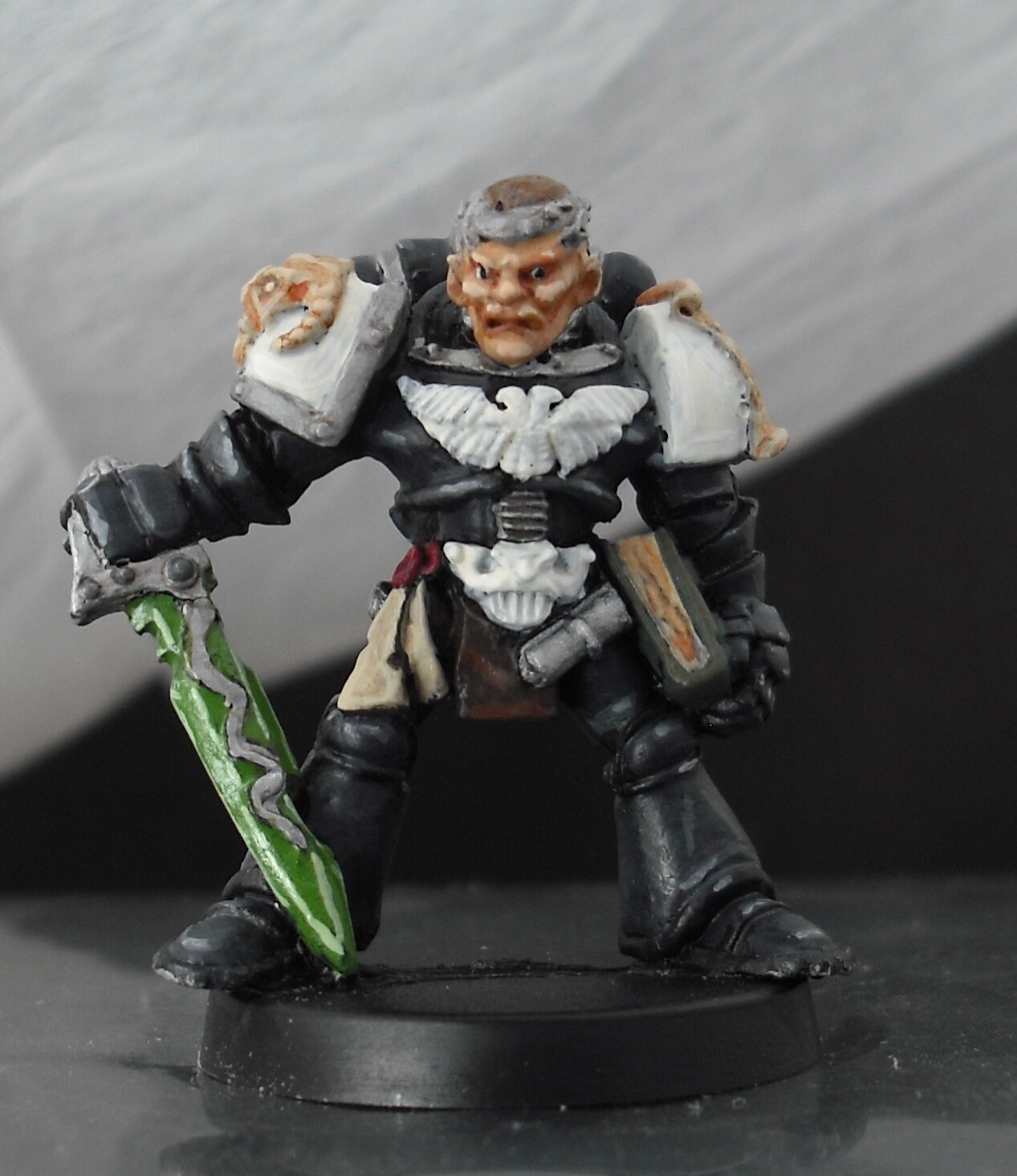 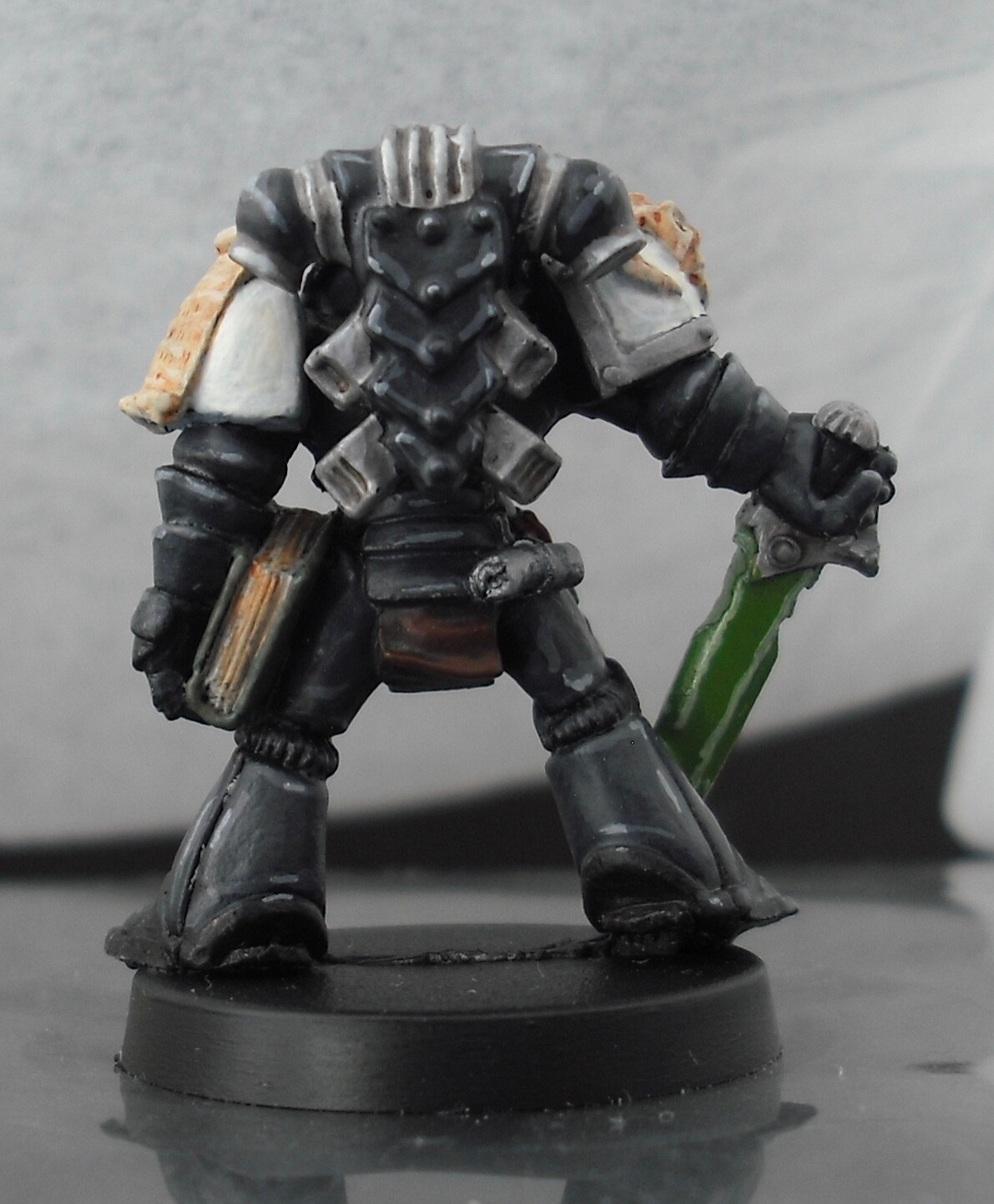 As for the inspiration, well I'll just leave this here... Nothing painting wise to show at the moment I'm afraid (although I have painted some stuff, I just need to photograph the damn things), but recently I dug up the gang sheets from my old Necromunda campaign, and looking them over brought back some fun memories of games past. 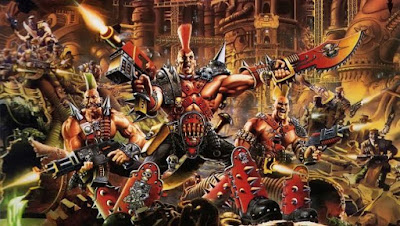 The campaign I played just involved me and my brother so whilst we each had our own gang (Escher for me and Van Saar for him) we also included "NPC" gangs from each of the other Houses. Later I believe we added Ratskins and Skavies when we got Outlanders.

We played our own gangs against each other or one of the "NPC" gangs, or even fights between two "NPC" gangs. We mostly played with the card terrain from the box, and the NPC gangs were proxied using the plastic Goliath and Orlock gangers (unpainted I'm ashamed to say...).

Looking at the gang sheets now shows some questionable naming going on (the Delaque gang was the MIB's with several X-Files references for example...).

However I remember some fun developments over the campaign. My Escher gang was somewhat lacking in womanpower (due to being built around the 8 models in the gang boxset) and a recall one game where due to a poor deployment half of the girls were taken out by a single frag grenade!

Some of my fondest memories are how of some of gangers gained personalities purely from then luck of dice (and sometimes irrespective of their characteristics).

My brother's gang contained a ganger named March, who developed a reputation for never missing (it wasn't like my brother was overly lucking in his dice rolls, except when it came to March's to hit rolls anyway). He literally never missed a shot, and it was a good thing he was armed with a lasgun due to all the ammo rolls he had to make. No doubt this capability was why March appears to have accumulated the most experience of any ordinary ganger in the campaign...

The Delaques had a ganger named Crycek (that would be one of the X-Files references...) who also developed a reputation for never getting hit, no matter what was fired at him.

Probably the defining moment of the campaign was when the Van Saars and Delaques faced off against each other. During the game the moment came when March took a shot at Crycek. The unstoppable force had met the immovable object! The impossible marksman versus the invisible man! Which would retain their reputation untarnished!

We both watched the roll with bated breath...

And... It was a hit!!! March's unbroken record remained intact! Crycek's was in tatters.

Reveling in his triumph my brother made the roll to wound...

A natural 1. Crycek escaped unscathed (well apart from the, for him, new experience of being pinned I suppose)...

It was moments like that made Necromunda the game it was for me. Unfortunately the campaign never really reached a conclusion eventually being abandoned as other parts of life got in the way. 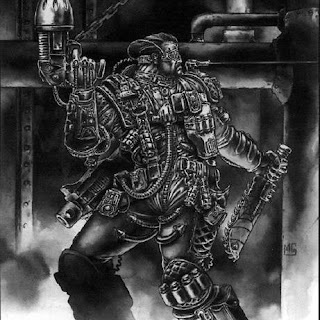 But I can still recall that epic moment, and how those names written on a piece of paper and the little plastic men they were assigned to came to life through the whims of those tiny cubes of fate.

Posted by Captain Smyrk at 23:33 No comments:

After a bit of a break from mini painting I have been working more on my famous sci-fi franchise inspired scenario idea.

I thought that Inquisitor Thrad needed some white armoured minions to complete his ensemble. I did consider using some Space Marines but I don't actually have many of those and had already used them in my other Inquisitor's (Tycho) retinue.

Instead I settled on some of the early Imperial Guard troopers with more armour than the normal bunch. 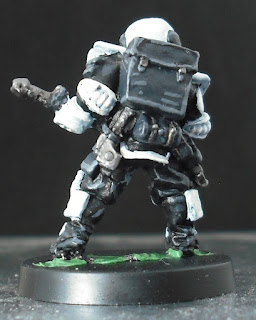 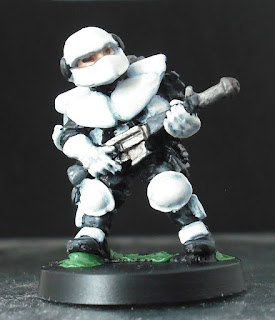 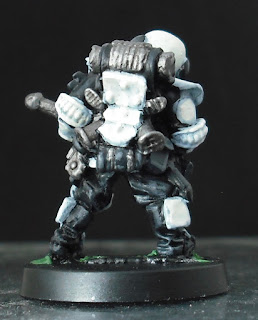 I'm pretty happy with how the two of them have turned out, even if they are quite difficult to photograph! They do actually remind me more of the Spaceballs from Mel Brooks' parody (hence the title...) than actual Stormtroopers (probably something to do with the rounded helmets) but I don't think that's a major problem.

Finally a shot of them with their boss. 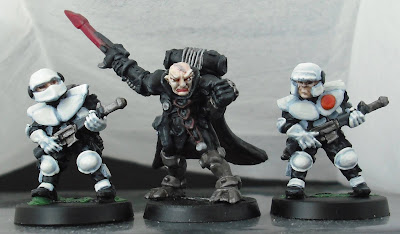 I've painted up a few reinforcements for my Broad Arrow Gang, 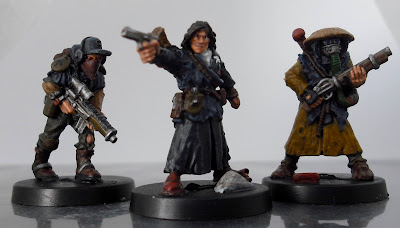 These are all Scavengers from the old Grenadier range by Mark Copplestone, these ones acquired from Forlorn Hope miniatures.

First up we have Bastille Vega. 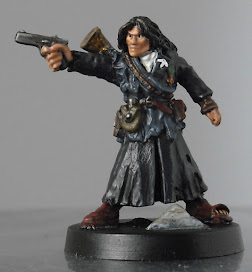 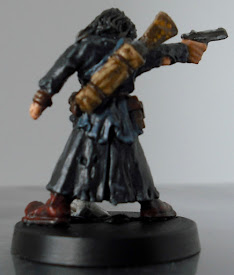 I attempted to get another brass studded arrow symbol on the stock of his shotgun, didn't come out quite so well as the others. 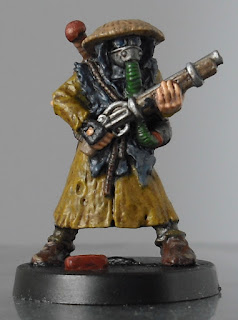 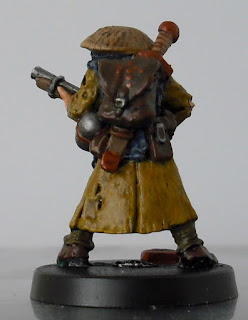 This guy has an arrow painted on his shotgun hand guard and a studded one on his back pack. 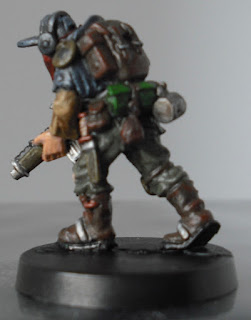 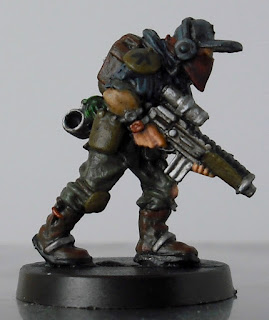 The last one has the arrows on shoulder pads.

And finally a shot of the whole gang.

Just a quick one this time, and not an Eldar.

This time around another of the early Rogue Trader minis, Techpriest Zon, or as he was originally titled a Telepath. 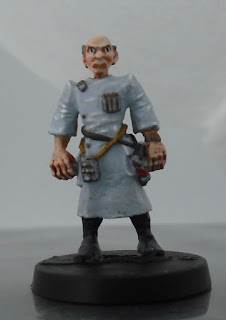 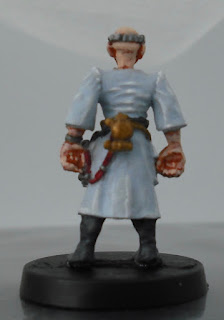 Went with a lab coat look for his clothing with a bit more steampunky technology theme for his various gubbins.

Adds to my growing collection of non-combat types.

I'm almost finished on some reinforcements for the Broad Arrow Gang who will be in the next post hopefully later this week.

I have continued with painting Eldar in recent weeks with a couple of new minis.

First up is one of the original Ghost-Warrior minis, the Assassin-class. 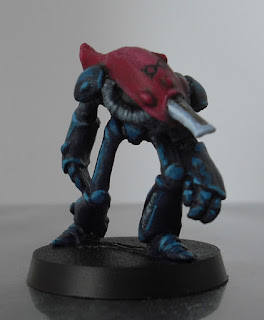 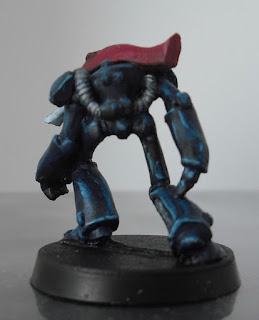 Tried to get go quite dark with a high contrast highlight to give a shadowy feel, given they are supposed to be stealth troopers.

The freehand Wraithguard rune didn't come out quite as well as I'd hoped.

The second is not a new model but a repaint of my Eldar Commander to bring him more in line with my more recent Eldar, am planning to do that to my other earlier Eldar as well. 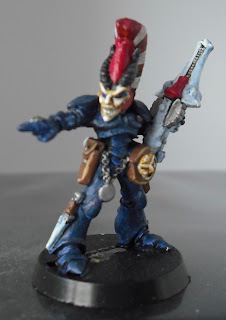 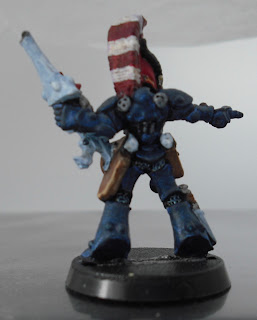 As well as repainting his armour to darken it up I gave him a traditional Eldar striped helmet plume. 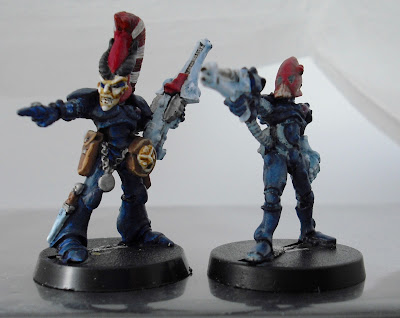 And finally a quick comparison to one of the newer Eldar.

Some time last year I made a post about reproductions of the battle maps for first White Dwarf Battle Report I encountered.

This battle report was the origin of my general love of the Eldar in 40k (blasphemy to my normal fantasy preference for Dwarves...).

It was also where I gained my love of the original Fire Dragon Aspect Warrior miniatures (not sure why since they were painted in a somewhat uninteresting reddish-brown with yellow helmets). In particular the Fire Dragon Exarch remains one of my all time favourite 40k miniatures.

Back when I started this blog I painted up some Fire Dragons but although I had the Exarch I didn't paint it through a bit of trepidation about painting my favourite mini.

Finally I've got around to painting him up. 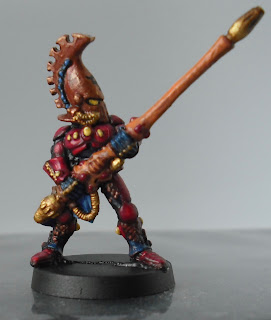 I chose to paint his helmet metallic rather than the orange of the ordinary troopers to help differentiate him. I chose the copper because it is still reminiscent of the orange. 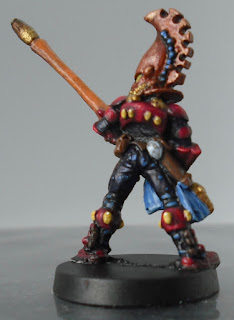 Here's the whole squad so far.

After taking this photo I've noticed that I clearly used a different red than I thought when highlighting the earlier troopers... Blast...

Anyway. Till next time.

Posted by Captain Smyrk at 14:27 No comments: