So having got the obvious joke out of the way...

I present for your delectation Inquisitor Rastaban Tycho, archnemesis of Captain Smyrk.


I only noticed whilst I was painting him that he has a large T on one of shoulder pads. Strangely appropriate given his name...


Took me ages to track down some loose RT space marine backpacks for a remotely sensible price on Evilbay. At least now I have small stash for various powered armour models I have.


That means that both of the main Protagonists from my Euphoria settings have now been painted. Admittedly Smyrk's crew is currently rather more numerous than Tycho's retinue...

Got another mini painted up this week.

The latest recruit for Euphoria's Arbites Precinct has reported for duty and he's brought along something a little more weighty than a shotgun or bolter...

And here he is with his buddies.

Working on Inquisitor Tycho next but still working out exactly how I want him to look.

Cap'n Smyrk
Posted by Captain Smyrk at 14:53 No comments:

So Tuesday was the one year anniversary for the blog and I was planning to do a post to go along with it but since I didn't write one in advance and was away for work for the week I... well didn't.

Anyway to make up for that and in someway celebrate that event I'm posting now, although I don't really have anything new to show off for it so I'm just going to have to go for a retrospective...

Considering what I've achieved since starting this blog I can say I've done pretty well by my standards, having painted twenty-eight minis during the past year, compared to the none that I'd painted for many years prior to that.

Looking back at the targets I set for myself back at the start of 2015 I've managed to paint 12 minis out of my target of 17 and less than three months in, so my painting progress speed has clearly gone up! And so far I've managed more than one post a month so meeting my second target.
Still little progress on basing most of the models I've painted so far however.

I've also made a start on building my own little slice of the 40K universe to set the models I'm painting in. As part of this I have the beginnings of several warbands already.

Nearest completion is the eponymous Captain Julius T. Smyrk and his crew of reprobates.

As a side project I also have the beginnings of an Eldar army.

And a half finished Necromunda Escher gang.

So moving into this blog's second year I'm pretty happy with how its going so far and hope to get a lot more done as well.

Father Toil is just the Astropath from the Adventurers range. 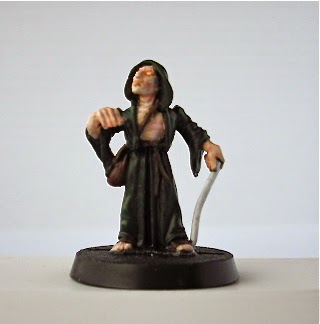 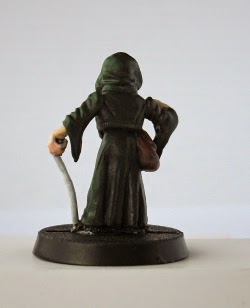 Milady d'Wysper (as her name suggests) is supposed to be a sort of bodyguard/assassin as much as an actually a lady in waiting. She is from the fantasy Fighters range, a weird member named as Klotilde Ironface in the Citadel Compendium. She does seem a bit odd as a fantasy fighter, I've seen her described somewhere as a pubescent girl in a hockey mask...

She really is tiny compared to most of the figures but I think that adds to her character. 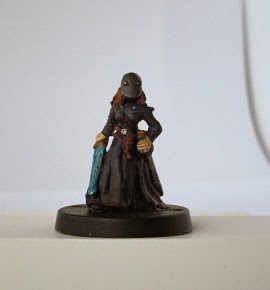 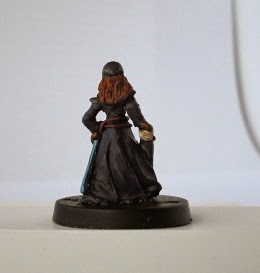 And a pic of the two together to give a bit of scale. 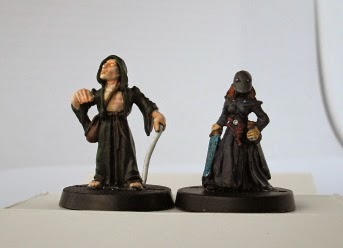 Don't know what I'll do next, be away for work next week so won't get anything done till next weekend.